The short version: I’m a hiking biking (and more recently, van-tripping) queer vagabond who is all about moving gently and slowly on this amazing earth, savouring and supporting it’s many diverse communities and environments, and trying to live in as thoughtful a way as I can manage.

The longer version:
I was born in Germany and spent my early childhood in Turkey, but have lived most of my life in British Columbia, Canada. For the last three decades, when I have had an address it has usually been somewhere near Nelson, BC, in the unceded territories of the Ktunaxa and Sinixt peoples. But in general I am a nomadic soul and have moved about a great deal, racking up many many nights in my tent or under the stars, sleeping in wild places. 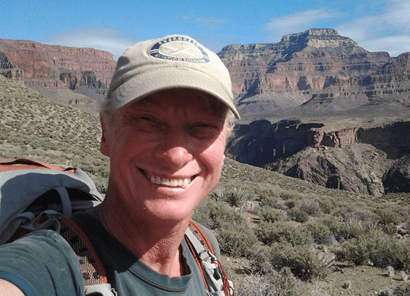 I got the long distance wilderness backpacking bug in the mid 80’s and have had a few awesome adventures on foot since then. In 2000, I tried cycle touring for the first time; my first overnight trip was several thousand kilometers and took me past the arctic circle to Inuvik. I fell in love with touring and have done a number of tours since, all on the same non-suspension mountain bike (a Specialized Rockhopper which at some point in our adventures together gained the nickname Red Baron). In the summer of 2016 I bought and roughly camperized a mini van (a dodge grand caravan a.k.a. the Silver Pig) which has served as ‘luxury’ accommodation for a few road/camping trips since. I still hope to spend more time exploring the wilds with a backpack and a tent, but I am not aging all that gracefully and arthritis is setting some limits on what I am able to do.

I’m now more or less retired, but even before that I worked just enough to fund my trips. I am trained as a land survey tech, and did work in that field a fair bit, but over the years I have also driven cab, delivered fliers and catalogues, worked as a wilderness guide, and done various other jobs in order to keep going.

I am passionate about hiking and biking, but also about sustainable living in general and about living in a way that at least makes some personal concession to reducing the disparity between the rich and the poor in our global community. I try to acknowledge the injustices that have been and continue to be perpetrated by colonialism and the colonialist mentality, and also try to encourage people to celebrate “otherness” rather than using it as an excuse to see certain people as less than human. As a trans/queer person I have a fairly first hand understanding of marginalization; but I also recognize my privilege as a white person and as someone who has had access to post-secondary education.

I’m a philosophy and amateur science nerd and love reading and thinking about ethics and human nature and how things work in general.

In the past I’ve kept separate blogs for each of my adventures, mostly on trailjournals.com and crazyguyonabike.com, with links to each from my own site: hikerbiker.org. But it’s all getting a little unwieldy and, with the nature of my adventures most likely changing from long backpacking and biking trips to more van (and other forms of transport) based explorations and shorter hikes, I decided to set up this new blog to chronicle my future adventures.

“All roads in life lead nowhere, so you might as well take the one that most satisfies your spirit.”
(There are various versions of this quote of uncertain origin. This is my version.)